June 30th marked one month that we’ve been doing this challenge and I didn’t even realize it until it had already passed!  I’m going to take that as a good sign because it means I’m not counting down the days until I can eat sugar again (as I thought I would be).

If you’ve been reading this blog since the beginning, you know that when we first started this challenge I was curious to see how not eating sugar would affect my sugar cravings and energy levels.  I am happy to report after one month that I think both have definitely improved.

It seems like I have only noticed these changes in the past couple of weeks.  Maybe it was going to China and breaking away from my normal routine, or maybe it is just that it takes that long for results to start showing, but I’m finally starting to feel a difference in my body.  Honestly, in the beginning I felt terrible.  For the first couple of weeks I was actually feeling worse than I had been feeling before I cut processed sugar out of my diet and was wondering if it was really worth it to continue.  Perhaps I was eating more of something that I hadn’t been eating much of before (such as soy or more grains), but whatever it was, it has gone away now and I’m feeling much better.

I’m actually feeling really good about myself right now.  There were only a handful of times that I craved sugar in the past month and those times are becoming fewer and further between.  I have also noticed that certain foods that did not taste that sweet to me before, now taste much sweeter.  I first noticed it in China when I bought what I thought was unsweetened tea and it turned out to be sweetened.  I thought it was disgustingly sweet, but my husband said it tasted normal.  I noticed it again when I got home and ate a handful of Kashi Go Lean cereal.  I used to think Go Lean tasted pretty much like cardboard when I ate it dry, but the other day I could actually taste some sweetness in it.  Each of these little improvements give me motivation to keep going….we’ll see how I feel in another month :).

I know I have already said it many times before, but it’s worth repeating for any of you who are thinking about giving up processed sugars—it is liberating to pass up sweets and desserts altogether rather than battle with myself not to eat too much.

As far as my energy goes, I mentioned in my last post that while I was in China I noticed a significant improvement in my energy levels.  Even though I was walking around for hours and hours each day, I still felt like I had a lot of energy.  Despite the fact that I am a pretty active person and get plenty of sleep, I normally get really tired during the day and often feel like I could fall asleep at any point.  I only felt like that once or twice in China and I think those feelings were justified from all of the sightseeing.  Hopefully this trend continues :).

I think it’s important to put a little disclaimer here.  By sharing with you my journey, I am not trying to say that cutting out processed sugars are the answer to everyone’s dietary woes.  Every body handles foods differently—some people can eat diets very high in fat while others can eat a lot of sugar without seeing any noticeable difference in their weight, energy levels, or overall health (more on this later).  Just because I have noticed a difference in how I feel does not mean I think cutting out processed sugars will ‘fix’ everyone’s problems.  However, I would encourage you to play around with what you eat to find out what works best for your body.

On that note, I’ll leave you with some more pictures from our trip :).  These were all taken in Beijing.  I’ll share some from the other cities in the next couple of days.

This adorable lady invited us into her home. I wish I could have taken her home with us!

Spinning the prayer wheels at one of the local temples. 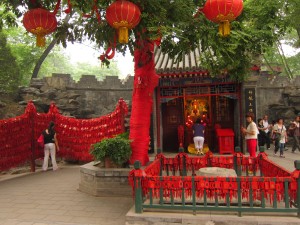 A little shrine at one of the gardens I visited.

I loved the architecture and the vibrant colors everywhere.

Such a relaxing place amongst the hustle and bustle of the city. 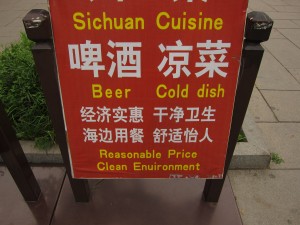 Hmmm not sure I trust the food in this clean "environment" 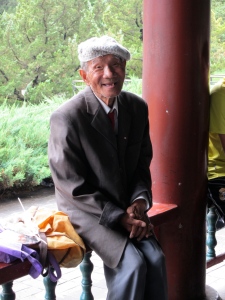 What a happy guy!

One of the watchtowers at the Forbidden City

Houses along the moat at the edge of the Forbidden City 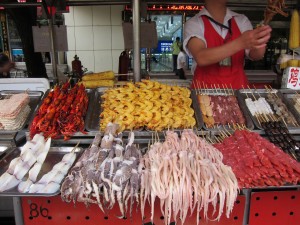 Some Chinese delicacies I did not try.....

Archway to the Great Wall

This was at the bottom of the Great Wall! Globalization at its finest.

Question: Have you ever cut anything out of your diet?  What was it and for how long did you do it?  Did you notice any improvements?

So far things are going really well.  It’s amazing how much more mindful of my eating I’ve become in just the past two days.  I consider myself to be pretty conscious about what I eat, but at the same time, I have what some might call a slight sugar addiction :).  I love love love to bake and almost always crave something sweet after I eat.  I usually have some sort of homemade baked good on my counter so most of my friends are shocked to hear I’m giving up all processed sugar for the summer.  Most of them ask, “what are you going to do if you can’t bake?”  I know it’s shocking, but it’s something I’ve wanted to do for a long time and I’m actually looking forward to experimenting with my baking and finding ways to make delicious baked goods without processed sugars.

However, I’m also looking forward to knowing what it’s like not to constantly be craving sugar.  In the past two days, I haven’t really felt like I’ve wanted sugar too much, but that might have something to do with the fact that Amanda and I baked up a storm in the past month and my body needs to detox :).  One thing that I have noticed is that it almost feels liberating to not eat sugar.  I thought it would feel restrictive, but I don’t feel that way at all.  Before we started this challenge, if I saw a baked good then I would almost certainly want to eat it and would have to battle with myself not to eat it–or at least not to eat too much.  Now that I’m not eating sugar, it’s much easier to just say no.

One of the goals of this challenge is also to be more mindful of what we’re eating.  I always add protein powder to my smoothies, but found out yesterday that my protein powder has sugar in it.  Who knew?  I guess it’s not that surprising since it does taste kind of sweet, but honestly I had never thought about that before.  Then last night, my husband and I went out to dinner and he grabbed some hard candies by the cash register on our way out.  I normally would do the same thing and when I saw him reach for the candies, I realized  that I almost always reach for those candies too without even thinking about it.

The other thing that I’m really looking forward to with this challenge is to see how my energy levels change.  Even though I exercise regularly, I still often feel lethargic and I’m interested to see if I my energy level increases as my sugar intake decreases.

And because I think blogs are way more exciting if they have pictures, I’ll leave you with a couple of pictures of us from Amanda’s last day in Okinawa.  They don’t relate to food, but they’re fun! 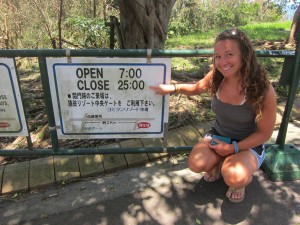 We blew our own glass. It was pretty tricky! Check out the sweet protective gear we got to wear! 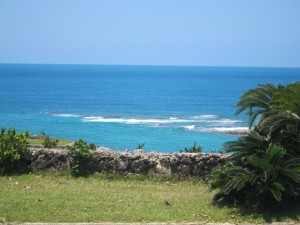 The sun finally came out for Amanda's last day!

Have you ever given up sugar before?  If so, did you notice any changes in your body, energy levels, overall health?  We’re curious to hear about your experience eating more naturally so please leave your comments below!